5. Höll på att bli rånad i Rom, men klarade det galant: "A guy in broken English asked me for money. I said, 'You give me money.' He turned around and he walked away."

After watching Delirium - Photos of Gioia there’s a sense of disappointment striking me. Not that this was a bad movie, but it didn’t have that special energy. It felt uninspired for the most, except Lambertos cool ideas with the murders vision – but it could have been done better. Lambertos direction almost felt inhibited...

Serena Grandi was a surprise. I don’t know why, but I didn’t except her to be so good. Not that the role has much to offer for her, but she definitive had charisma and talent not to make the part of Gioia boring. The cast was excellent, and maybe that helped her to make such a good job. David Brandon is a fave, always great and interesting. Can make the dullest part quiet spectacular. Karl Zinny is good as the young pervert and Lino Salemme is always sleazy and bizarre...what a face (only a mother could love!). George Eastman and Daria Nicolodi does their job and does it good. But it not the parts we will remember them for.

It feels like a TV-movie, but isn’t...but I felt that Lamberto deep inside just delivered a movie and got the paycheck – even if he seems quiet fond of it. I prefer You’ll die a midnight, one of the best and most entertaining giallos made during the eighties. Give me a dvd of that one! :)

But to get to a conclusion. I liked it. It was a good and entertaining little flick and is well worth a purchase on dvd.

BUT BEWARE!!!! Those dopeheads at Shriek Show actually reveales the killer on the back of the dvd with a nice, clean shot with the killer and a big, big knife! Stupid morons!

Something is rotten in the state of Korea...and that is Yonggary!

Yonggary (as the correct korean spelling is) or "Yon-garee" as the english dubbing says, is probably the worst and maybe funniest kaiju-movie ever made (well, King Kong vs Godzilla is funnier!).

It's basically a rip off of EVERY Godzilla-movie ever made, especially those from the sixties. It's also very, very cheap and has a lot of sloppily made miniatures, visual effects and monster-costums to entertain the whole Bin Ladin-family.

But of course it's great. It's 75 minutes of great fun and monster-mayhem. It's cheesy and still much, much, much better than that awful boring american Godzilla-remake.

It even has an annoying, distrubed, cute, irritating brat that plays a round with an itching-beam and makes Yonggary dance!!! Yonggarys movies reminded me of Nic Cages dancing in Wild at heart, but much, much slower.That nasty little boy should have been skull-fucked by Yonggary or at least raped by that gigant frigging nose-horn! But we who are fans of kaiju are used to annoying kids, so I guess I have to accept it :)

It's on cheapo-dvd nowdays in a terrible, fullscreen (missing a lot of info on the sides), dubbed and murky version released by the legendary Alpha Video ;)

Wow! I’ve owned the dvd (thanks to David Z!) for two days now and I’ve seen it twice. First with the superior swedish track and then with the english track.

It’s important to know that the only track worth mention is the swedish track. There you have the great and smart dialogue and character-development that goes totally wrong in the english dub. So watch it with english subtitles. Don’t be lazy, learn to read! :)

What strikes me the first when seeing the movie for the first time in a couple of years is how beautiful it is. After watching a crappy bootleg for years, this is a true revelation! Bo-Arne has clearly choose the swedish autumn for it’s staggering beauty and clear and strong colors. This is what I see every years outside my door, but this is the first time I’ve seen it so well presented in a movie. This is here the movie also shows it’s true arthouse-face. The scene with the childmolester isn’t sleazy (thank god for that!) or exploitive at all. It’s poetic and horrible. Disgusting. When the tobacco (or just maybe "snus") pours out if his mouth in excitment it’s not just awful and grotesque, it’s swedish filmmaking at its best.

It’s a dreamlike movie, but also very naturalistic (aka very swedish) with stylish and impressive cinematography by Andreas Bellis. He and Bo-Arne both handles action, sex and drama with the same high quality. I think it’s important not to forget the strange and surrealistic score by electro-maestro Ralph Lundsten. Like a constant wall of sound he wraps the story with uniqe electronic landscapes, some of them very childish and like nursery rhymes and others just...echoes and sonic vibrations/distortions.

Regaring the action...it’s great. And it looks more expensive than it is. Okey, you can’t compare the car chase to the one in Bullit or Blazing Magnums, but’s quite alright to be in a swedish exploitation movie from 1973. They shot it, of course, completely without permits and a bunch of explosives and sometimes unaware extras out in the streets. The fightscene in the warehouse is uniqe and not very swedish. It’s more of a combination between Peckinpah and Bruce Lee, but directed by Jodorowsky!

The final is both very western AND very Jodorowsky (see, once again I can’t let go of the surrealistic vision this movie has). I know, because we’ve asked him, that Bo-Arne had no intention to let the ending (from the shoot out in the little fishing village to the horse...) to be very Sergio Leone, but it feels a lot like a scandinavian spaghettiwestern (actually there’s been made at least three westerns in sweden, but we call them "lingon-western" – Lingonberry-western).

But what makes Thriller what it is, is the actors. Christina Lindberg is PERFECT as Madeleine (in the english version, Frigga? Where came that name from?). She’s cute, sexy, warm and finally very, very cold. Its a very impressive performance and her love for the character shines thru. Heinz Hopf as the sleazebag Tony is both sadistic...and very frail and weak at the same time. A coward protecting himself with bodyguards and giving people drugs. Heinz was one of swedens best characteractors and I’m happy to see him in this movie. Another strong performance is by Per-Axel Arosenius as Madeleines father. A sensetive and intelligent portrait of a loving father. Per-Axel got a brutal ending to his life when he took suicide by burning himself to death in 1981.

This is my favorite swedish movie ever, together with Man on the roof, and it deserves a good dvd-release like this. Hopefully there will be more releases, maybe with the participation of Bo-Arne and Christina. 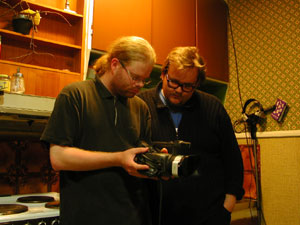 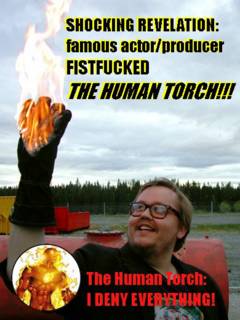 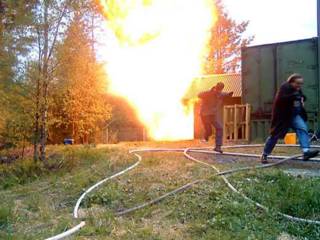