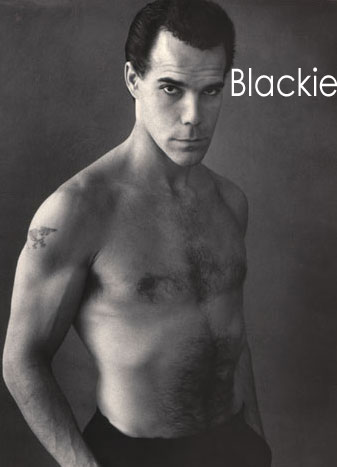 Fred Anderson: How did you first became interested in acting?

Blackie Dammett: As a kid in Grand Rapids Michigan (like almost
everybody else everywhere) I dreamed of Hollywood and the movies. I
watched them in darkened theaters and read about them in magazines.
Our family often took vacations to California and Los Angeles in
particular. As a teenager I ran away from home several
times--hitchhiking and even hopping freight trains to LA?2500 miles
from my home.

As a young man in college my good grades earned me a scholarship to
UCLA (university of Californian in Los Angeles) where they have a
motion picture curriculum. I earned my degree in theatre arts
specializing in motion
pictures. during college (where I took obligatory acting classes) I met
among others Richard Dreyfuss, Joey Bishop's son Larry, the doors Jim
Morrison and Greg Friedkin, son of David Friedkin who produced "I Spy"
- the TV show with Bill Cosby and Robert Culp and who wrote "The
Pawnbroker" with Rod Steiger. My intention was writing and directing,
and after UCLA I went to work at MGM as a writer, getting job through
David Friedkin. He introduced me to James Komack who produced "Welcome
back Cotter" with a young John Rravolta and "Chico and the man" with
Freddie Prinze and "The courtship of Eddie's father" with Bill Bixby.

Komack hired Greg Griedkin and myself to work on the Bixby show as
apprentices. Eventually MGM hired us as writers and we worked on a few
scripts until the studio changed hands and we were not renewed by the
new administration.

I drifted into public relations and ended up working for Alice Cooper's
company The Image Group, which had clients like John Lennon, Three Dog
Night, NY Dolls, Sha-na-na, Peter Yarrow, Paul Butterfield and others.

One day I was walking down Hollywood blvd and ran into my friend Karen
Lamm, who was then married to Robert Lamm from the group Chicago (she
would later marry beach boy Dennis Wilson, the one who drowned). She
was coming out of acting classes at the Lee Strasberg institute and
casually mentioned she thought I ought to try it. I did. Eventually I
studied with the master Lee Strasberg himself (Marlon Brando, James
Dean, Marilyn Monroe, Montgomery Clift, Shelley Winters, etc.).

Within a year I was working. "Walking Tall - the final chapter" was my
first film. a week after we returned from Tennessee I did Starsky and
hutch and then went right into Charlie's angel's. The rest, as they say, is
history.

FA: I agree! Tell me about Class reunion. You?re character there was very weird.

BD: Probably my second most bizarre character. Class Reunion was the
follow up to National Lampoon's animal house with John Belushi and was
a (relatively) big budget highly anticipated film (by far my biggest
paycheck and I worked more days (40 some) that any other actor). It
was written by John Hughes (Home alone, Pretty in pink, etc) but too
bad he didn't also direct.

He was a fresh faced kid out of Chicago and it was his first movie. The
producers picked Michael Miller to direct, a guy with a drinking problem
who had screwed up some earlier films and gave him one last chance to
redeem him self. Although he started out sober I guess he slipped because
the film never had a real good focus and although it opened big it never
had legs at the boxoffice and most critics panned it. The LA Times gave it
a good review however and said, "Dammett is perfection as the pathetic
psychopath". I remember I beat out Robert Englund (Nightmare on Elm
Street's Freddy Krueger) and several other good actors for the part of
Walter Baylor.

In a scene where the witchcraft girl uses her special powers to throw me
into a wall they had me hooked up to one of those reverse catapults they
use for shotgun blasted actors. The first time it worked great, but the
wall shook so they did a second take. The stupid SFX guys braced a 2X4
board perpendicular against the back of the wall and when I hit it, I
separated my rib cage at the breast bone and I had to do remaining 80% of
the film in considerable pain which seriously impaired my physical humor.
It was the same SFX people that shortly thereafter were responsible for Vic
Morrow and the 2 kids being mangled to death by the crashing helicopter
blade in Jim Landis "Twilight Zone".

FA: So, the most important of all, how did you get involved in the
classic Nine Deaths Of The Ninja?

Even before I came to the audition in the Century City (section of Los
Angeles) offices of the producer, I decided to make him a German
terrorist
raised in North Yemen and I brought the Sydney Greenstreet-esque white
topical suit, the tu-tone spectator shoes, and nazi stuff myself. It was
the mid-80's when LA heavy metal bands had a proclivity toward
anti-social behavior like nazi symbols so they were easy to find. My
entire costume in the movie was my own creation.

In the script Alby had this strange fascination with Rahji and I carried it
to extremes. During the audition I made up the scene where I couldn't get
my cigarette lit and had a fit and tore up the producer's coffee table
overturning water glasses and throwing magazines around the office and
scaring the hell out of everybody. The director loved everything I did in
the audition and told me to create my own madman.

FA: Alby the cruel is a pervert, a crazy bad guy. How did you work
with this fantastic character?

BD: I didn't see him as a pervert, more stressed by the situation and the
environment which was easy to relate to since as a film crew we were in
almost the same predicament as the fictional characters. An inhospitable
jungle, poisonous snakes and spiders, sudden monsoon rains, a guerrilla
communist army lurking in the dark trying to kill us, petty fights and
jealousies within the cast and crew. and like in the story occasional
breaks from the horror of the war when we had our rest and recuperation in
Manilla with all the sex and tropical foods and garish night life.

The crew was international: an American director, Indian producer,
ex-patriots from many countries living in the Philippines at the time in
production and crew. And American, Japanese, Indian and Philippino and
probably a few other nationalities in the cast.

FA: Some final words to our readers?

BD: I must say, of the 20 some movies and 30 some TV shows and about
50 plays, Nine Deaths Df The Ninja was one of my favorites because I
could and did get to chew up the scenery because:

a). ...the part itself was so outlandish and...
b). because we shot the movie in the Philippines during the NPA's war
against president Marcos and the country was on the verge of collapse
and life itself was absurd. We had a battallion of soldiers protecting
us in the jungle and every store in the country had an armed guard with
a machine gun.